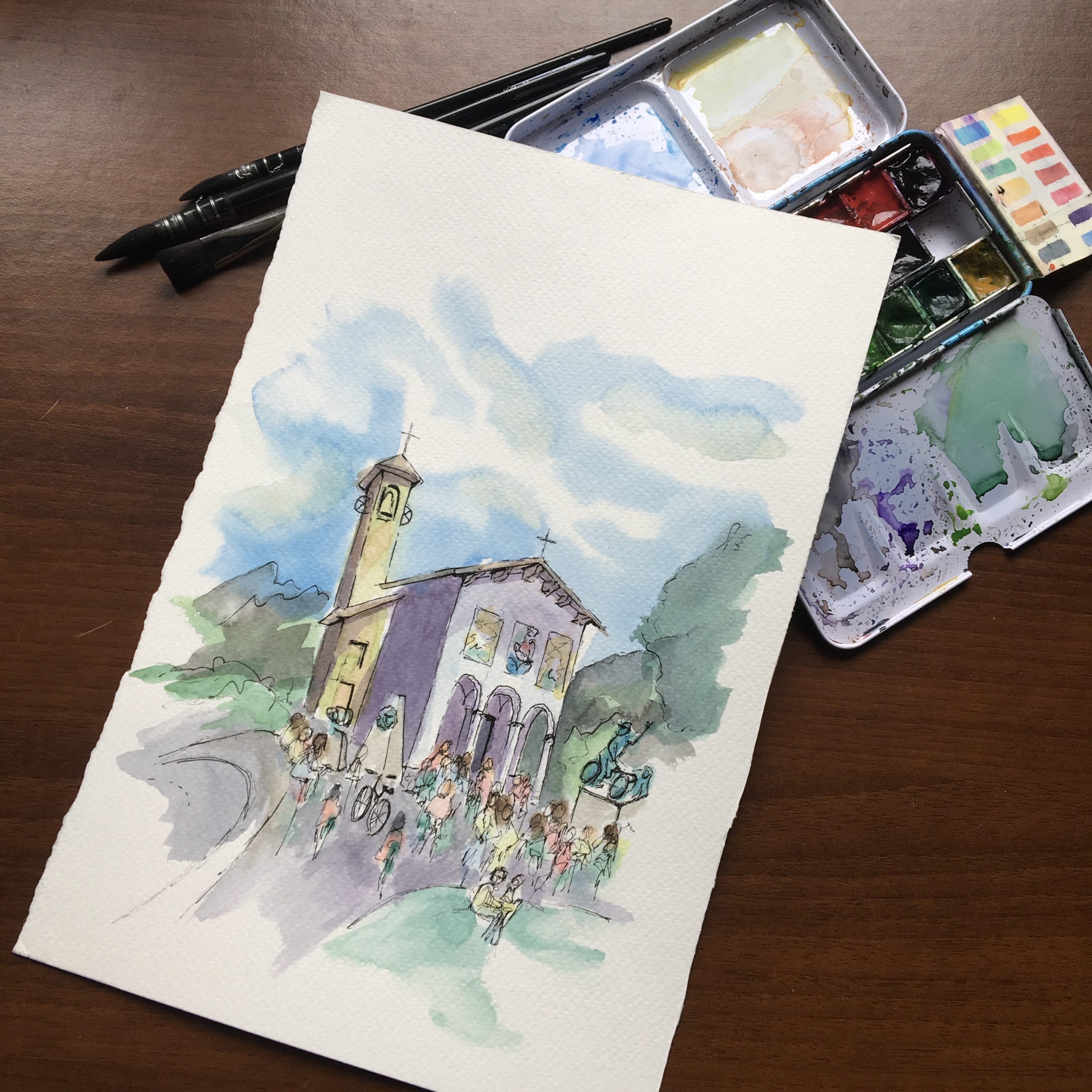 The church for the bicycles passionates

Painting of the Sanctuary of Madonna del Ghisallo during the #italiagrandsketchingtour.

From Lecco my trip lead me to Bellagio, where I would stop for a 4 days retreat of the Love Out Loud movement, an experience that I was looking forward to. I knew I only had half a day to get there and visit the famous city on the Como Lake.

To get to Bellagio there are two options, one route near the lake and one through the hills. My first choice would have been the lake, but when I was painting the Castle of the Innominato a couple of tourists from Milan stopped to talk to me and I decided to ask them if they had any suggestions for places to visit on my way to Bellagio. They told me I must not miss the Sanctuary of Madonna del Ghisallo, and I trusted the suggestion.

I was so rewarded for it! First of all because the mountain street with the motorbike was so much fun but also because of the great atmosphere I found at the Sanctuary. The church is very ancient. The story says that a nobleman called Ghisallo, in medieval times, was here attacked by brigands and vowed to the Madonna to build a church in her honor if he escaped. And he maintained his promise.

The Madonna of the cyclists

But the story doesn’t end here. The Ghisallo climb in fact is traditionally included in the Giro di Lombardia and has also been repeatedly a stop in the Giro d’Italia route, the famous international bicycle race.  For this reason the Madonna del Ghisallo is particularly revered by cyclists, and on the initiative of the then parish priest Don Ermelindo Viganò, in 1949 Pope Pius XII proclaimed her ‘Universal patroness of cyclists’.

This transformed the church in a sanctuary dedicated to collect all kinds of memorabilia from famous champions and passerby cyclists. Inside you can find bicycles that won world races, official t-shirts and a lot of other gifts to thank the Madonna for her protection. I was so lucky that I visited the Sanctuary on a Sunday morning and I found hundreds of sportsmen, groups and families enjoying the rush of a run in the mountain with their bicycle.

This place was so energetic. It was great to see all the love surrounding this sport. I realized  that cycling it is a lifestyle. It is choosing to put in the effort because the reward will be the mountain and the view.

I also reflected on how much sport is such an important teacher to us. If we allow it to teach us. It teaches strength and courage, it teaches winning and losing, it teach us teamwork, it teach us acceptance. It teach us that persistence is the key, that everything needs to be built slowly and constantly.

It teaches us life, in a nutshell.

Title of the painting ‘Sanctuary of Madonna del Ghisallo’ 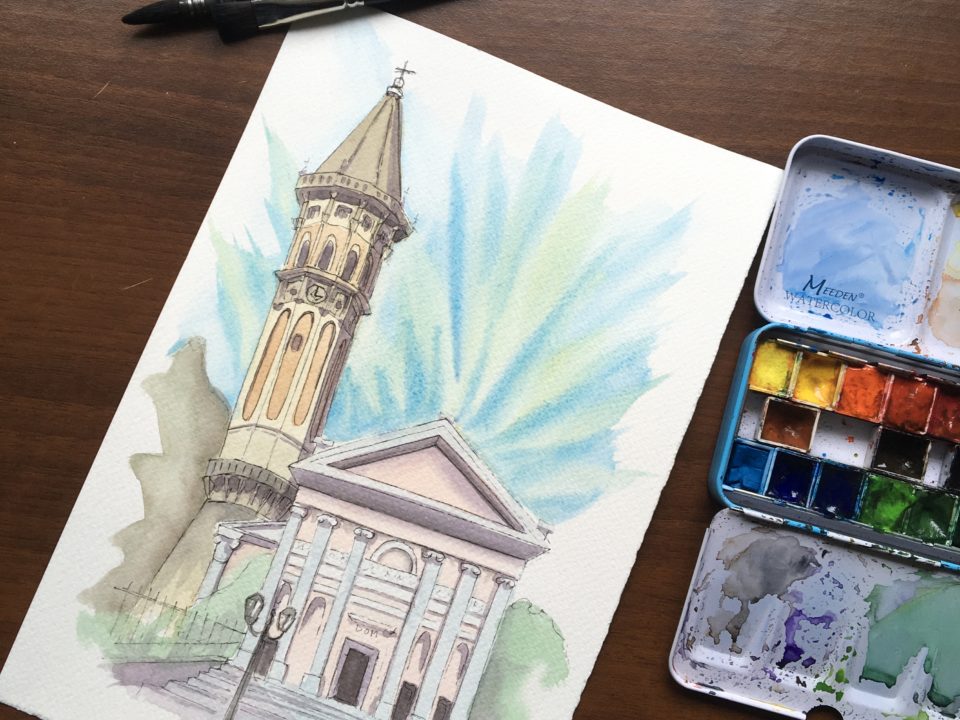 The Cathedral of San Nicola in Lecco 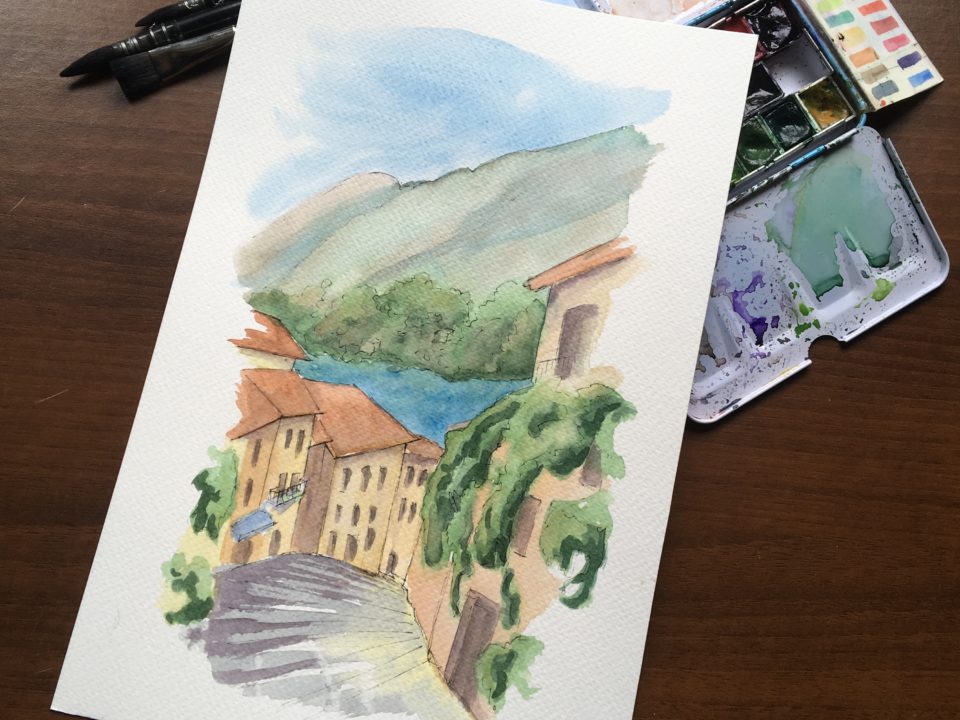 Bellagio on Lake Como and its beauties