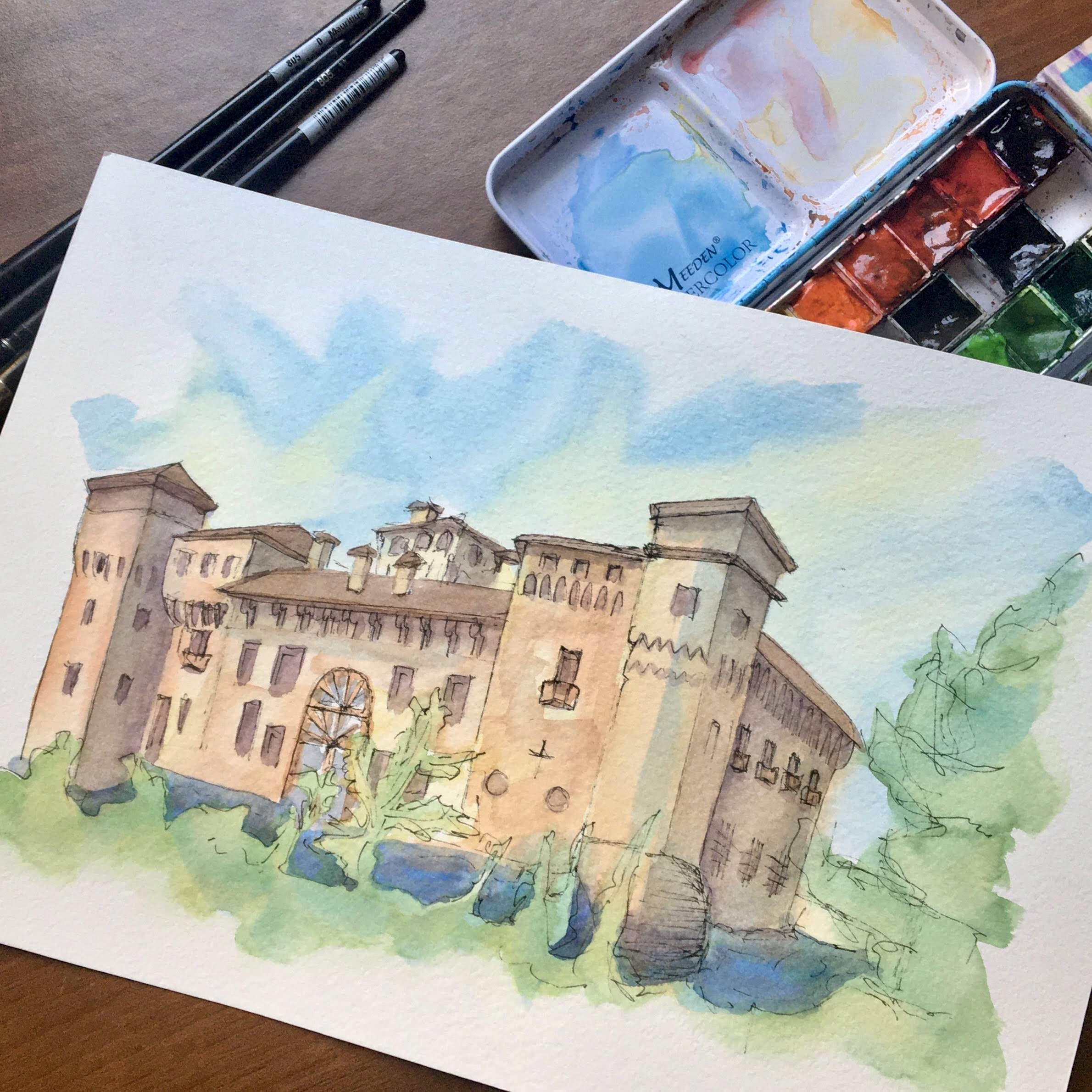 The Medieval Castle of Padernello

The castle with the ghost of the White Lady

The Medieval Castle of Padernello painted during the #italiagrandsketchingtour.

Continuing on my way back, I had another of my spur of the moment stops. I saw the brown sign on the street that indicates heritage sites and I just took the turn toward the Castle of Padernello. The place was deserted. To reach it, you take a series of small streets and end up in a town from the Middle Ages.

The first fortifications of the manor belonged to the noble family of the Martinengo family, a branch of the Counts of Padernello, until 1834. The place developed over the centuries to transform itself, in the course of the eighteenth century, into an elegant villa, taking on the shape that we admire today. In 19th century the Castle passed to the noble Salvadego family, of Venetian origin.

Since the beginning of the 20th Century the castle was inhabited, and it went almost to ruins until a handful of visionaries, the Friends of the Castle, restored the old posteria – grocery shop – that is now the “Osteria Aquila Rossa”, and began to take care of the manor and to enhance the village of Padernello.

The legend of the ghost

One of the cool things of the castle is the legend of the ghost of the White Lady. The story is about Biancamaria Martinengo. She was born in Brescia in the 15th Century and grew to be a melancholy girl.  She was in love with nature, with silence and could not stand a world made of violence, abuse and harassment in which she lived.  In the autumn of 1479 she moved from the city to the country residence of the family, in the village of Padernello. She lived happily in the countryside but on the evening of the 20th of July in 1480, Biancamaria saw a little bright magic, then another and another. The girl, full of joy, thought she could hover in the air and join those magical lights.  Thus, at the height of joy, Biancamaria sacrificed her life for the little fireflies.  She was thirteen. According to legend, Biancamaria transfigured into the White Lady and returns, on the night of her death, every ten years, dressed in white and holding an open golden book containing her secrets, hoping to find someone to share them with.

Title of the painting ‘The Medieval Castle of Padernello’ 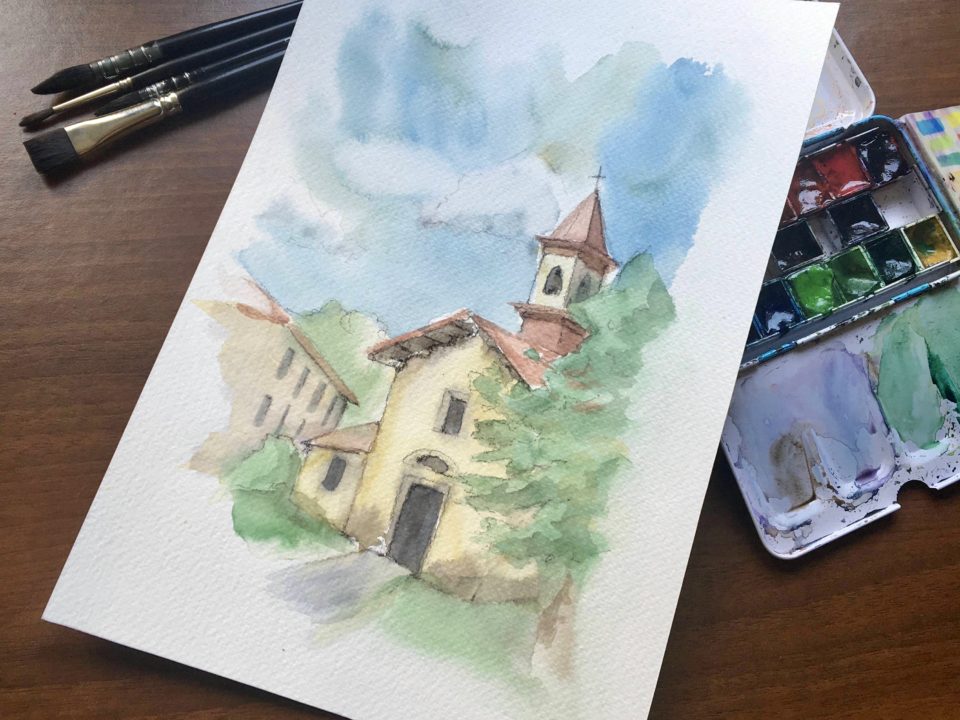 Church of Sant’Eusebio in Cinisello Balsamo 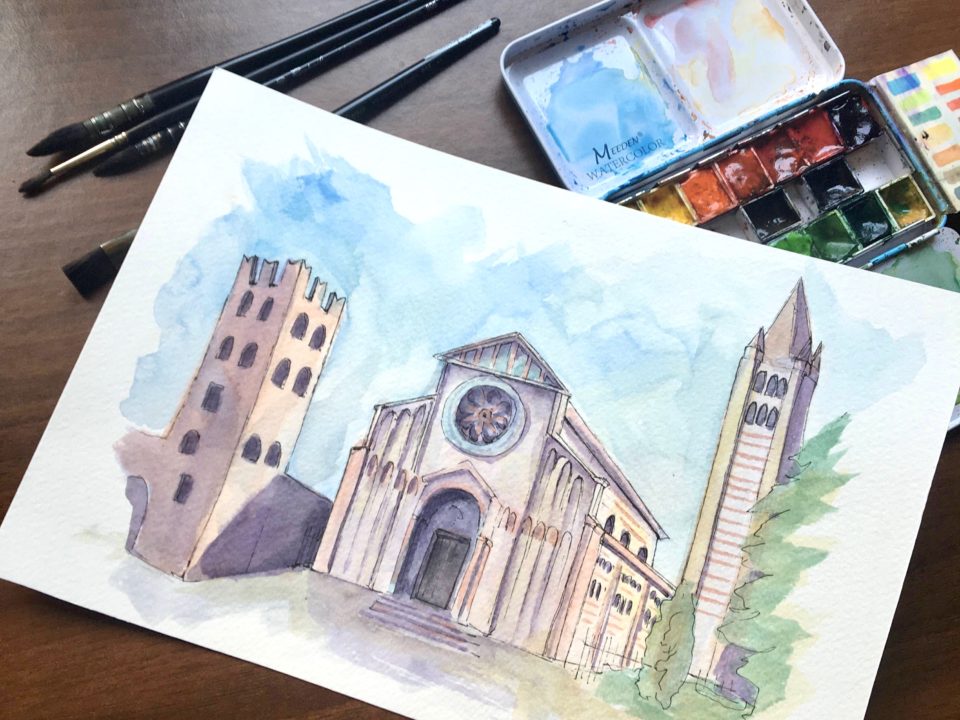 Basilica of San Zeno in Verona