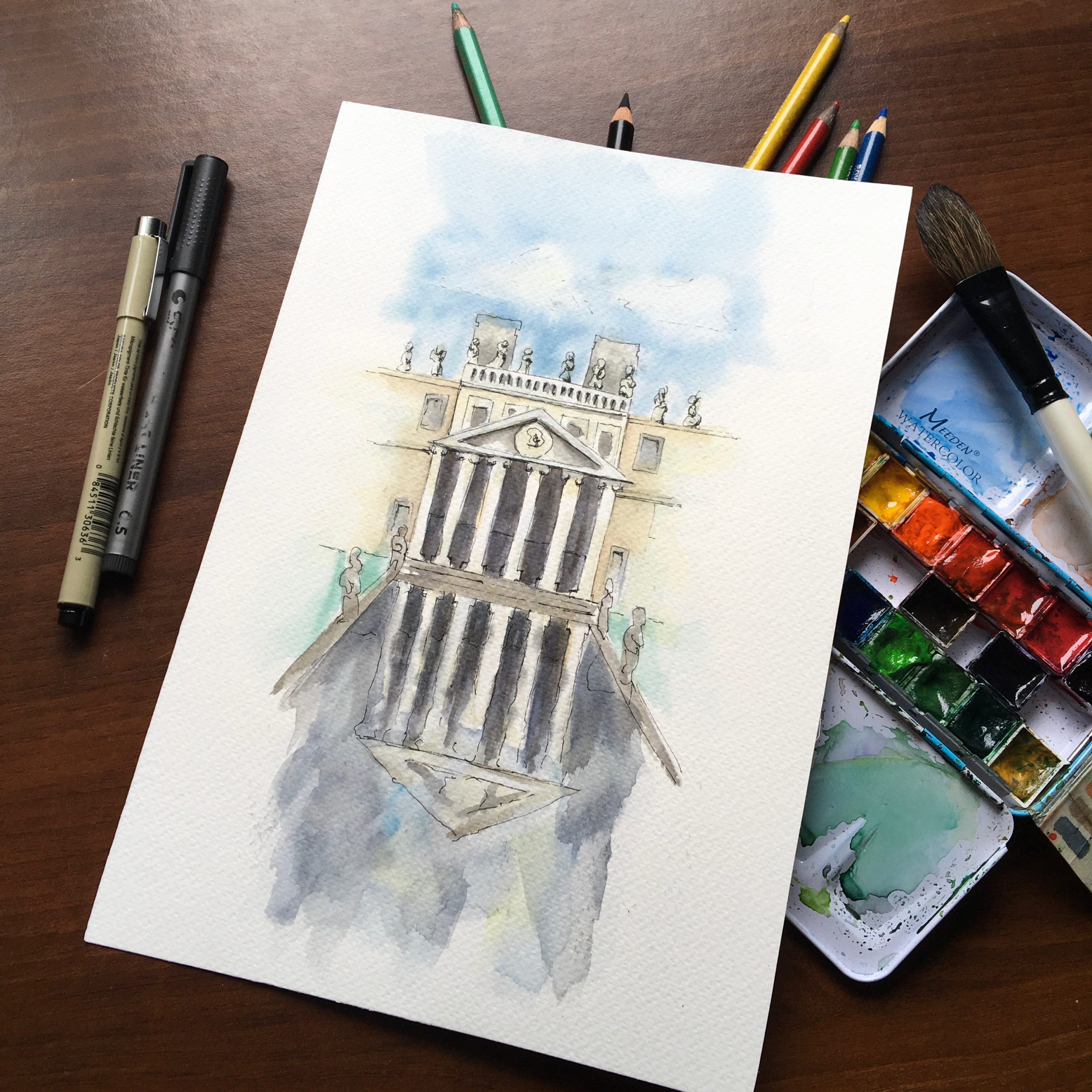 The wonderful gardens of the baroque villa

The Villa Pisani on Brenta river and the reflection of the stables in the garden fountain during the #italiagrandsketchingtour.

On the next day of the trip, we went to visit Villa Pisani at Stra, one of the most majestic Villas on the Brenta Canal. It is a monumental, late-Baroque palace located along the Brenta Canal, which links Venice to Padua.

Alvise Pisani became Doge of Venice in 1735 and commissioned this villa with 114 rooms, since he was the 114th Doge. The largest room is the ballroom, where the painter Giovanni Battista Tiepolo frescoed a massive allegorical depiction of the Apotheosis or Glory of the Pisani family. A room that takes the breath away for its incredible artworks, that I would have loved to spend hours to admire.

The glory of the Pisani anyhow was not long. The Villa changed ownerships many times. First it was bought by Napoleon in 1807. Later became property of the Habsburg and in 1934 it hosted the first meeting between Hitler and Mussolini. Nowadays is propriety of the state.

The construction of the swimming pool

One of the most monumental features is the view on the back of the Villa: two long avenues of chestnuts and in perspective the facade of the stables reflected in the long swimming pool. This was built in 1911 for hydraulic studies by the Hydrographic Institute of the University of Padua that had here the headquarters. Subsequently in 1913, the scientific purposes ceased, and the swimming pool was completely rebuilt and embellished with statues from other Venetian villas.

All together the long perspective, the reflection of the palace in the calm waters and the imposing facade become the perfect subject for this painting, while waiting for the guided tour of the villa to start.

This is a painting from the Italia Grand Sketching Tour Collection, a series of original ink and watercolor paintings done on location during my tour to discovery the  marvelous Italian heritage. All paintings are also available as numbered and originally signed prints. Check them in my shop.

Also, the painting and my Lecco adventures are narrated in the “Italia Grand Sketching Tour” book, available in Italian and in English. You can receive the free poster of the Tour here. 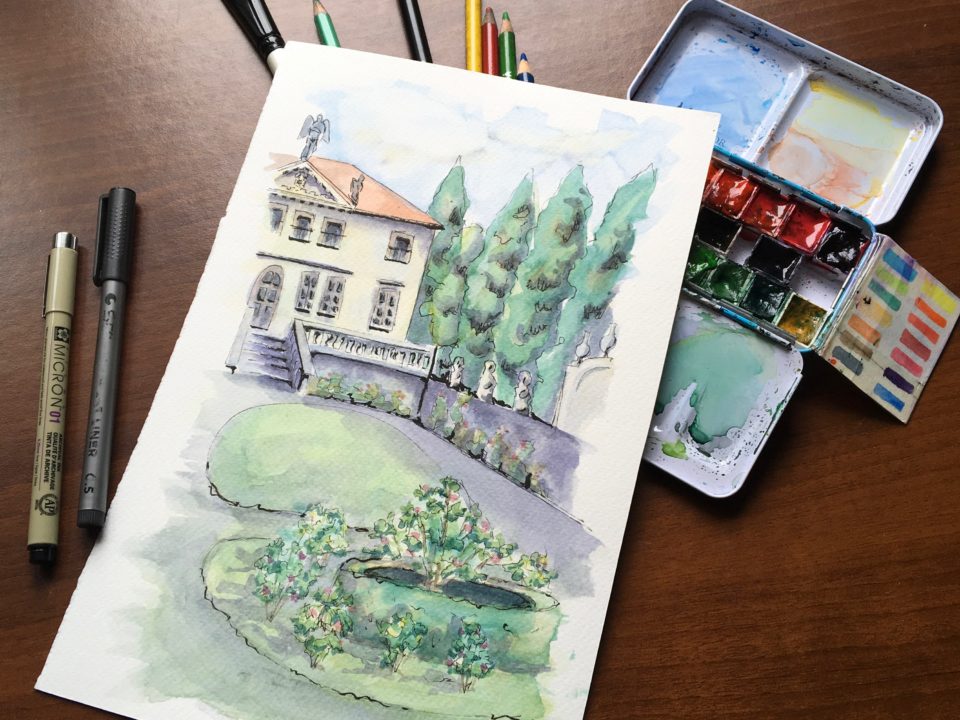 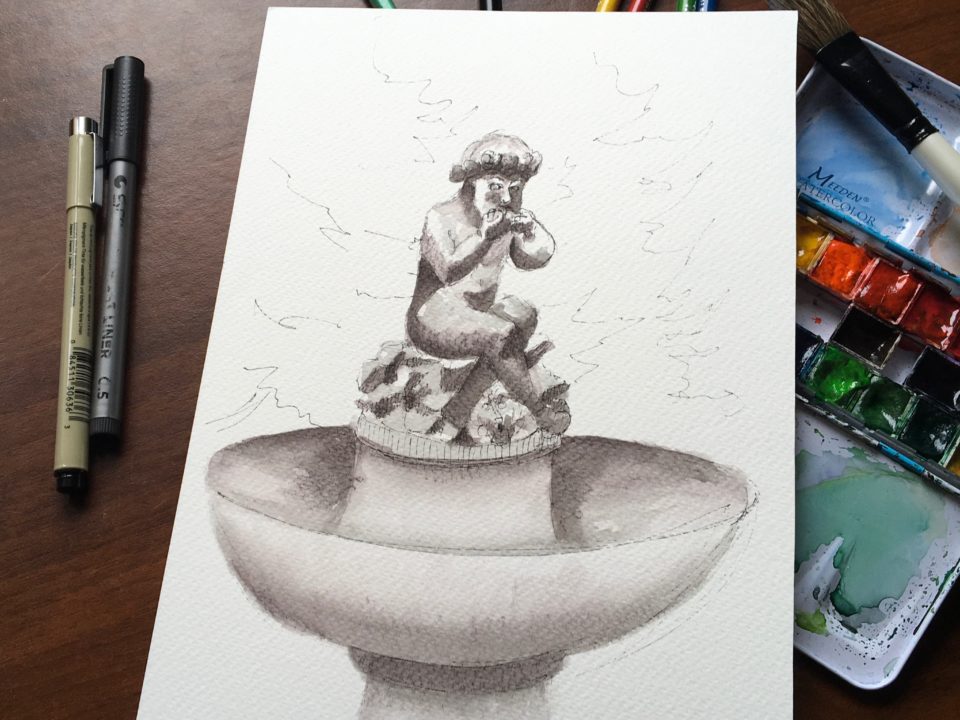 Statue from the Garden of Villa Pisani of Stra